I've told this to several people - "I don't know why I'm supposed to go to Kyrgyzstan, but when we signed up for M-Trips, it just felt like it was supposed to fit..."

Do I know now?

My attitude towards those who do work in third world countries used to be that of, "Wow, that is so great. I'm glad God called you there. I couldn't do it." Or so I thought. I didn't think I could live in deplorable conditions - no toilets, no shower, dirt and dust everywhere, etc.

No Toilets
When we got to the orphanage on Friday, we were taken to the "bathrooms." I put those in "" because they weren't really bathrooms like you and I are thinking. People had told me I'd probably be using "a hole in the ground." I thought, "There's no way they'd make little kids go to the toilet in a hole!" Again, I was wrong. Literally, a hole in the ground was what we used for a week when we had to make the trip to the potty...or as they are more commonly known "squatty pottys." And the stench. I can honestly say I have never smelled anything so potent and awful in my life. We were all holding our breaths because we'd gag if we breathed it in. And then we'd see the orphans walk in and out, no big deal. They were used to it. And my selfish, westernized self, would feel awful about holding my nose underneath the collar of my shirt. And I thought immediately of how sometimes, we as Americans or any Western country, tend to think we're above that because we don't have to deal with it. On Sunday when we went into the city, I found a squatty potty with a porcelain covering and felt as though I'd gone to the bathroom at the Ritz. 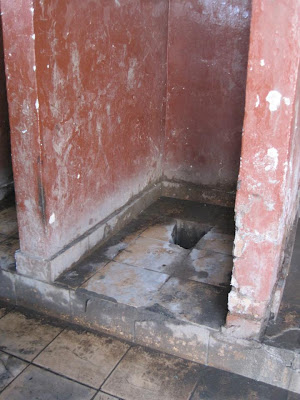 No Showers
One shower head for 200-something orphans. And because of that, they shower once a month. When I heard that, I couldn't believe it. On Tuesday, we took our second shower of the week. My hair had become so dirty that when I took my bandana off, it didn't budge. I laughed about it because I knew then that we were all probably so smelly that we couldn't even smell ourselves anymore. And the thing about the shower was that after we doused ourselves in soap and shampoo and then dried off, the dust and dirt was so bad by the time we got back to our rooms that we were probably just as dirty as we were before the shower. But it seemed not to matter to me anymore. In fact, a lot of "things" started not to matter anymore. 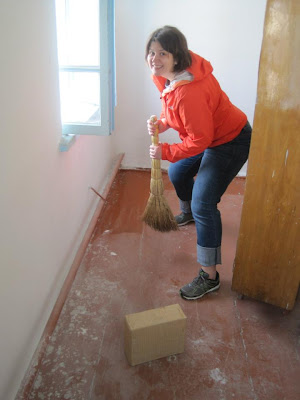 Orphans
I saved this for the last part because it's probably going to be the longest. I've gone on mission trips before where we interacted with children and even orphans. But these kids quickly became wrapped around my finger. Particularly two little girls I met on the first day. The more I played with them and the more English classes we taught, the more my heart ached for them. Especially watching them interact with our team. They were so happy. And even when we weren't outside with them, they were all smiles and were content playing in the dirt. I began to think of all the times I've been so extremely self-centered and wondered how I would survive without something and yet, here these precious little children were, content to play without toys and "things" and just climb on us like a big jungle gym. The more I stayed, the more I began to contemplate how much we are like these orphans. We come to our Papa God like dirty little orphans and he loves us unconditionally. He loves on us like no one or nothing else can love on us. These kids, most of them, were raised in a Muslim culture and so many of them have probably not heard about Jesus and likely refer to God as "Allah." But my prayer from the beginning was that they would see something different in us and that we'd just be able to love on them. The picture below is a perfect ending to this post. It captures the joy and beauty of an orphan and what I wish to be in front of my Father. 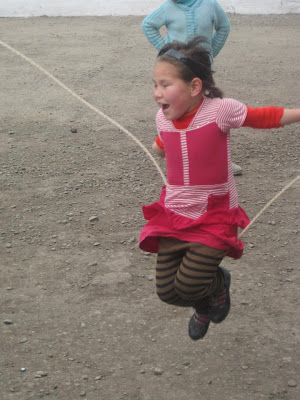